Being a solopreneur has risks

I was apprehensive about publishing last week's article (read it here).

But revealing my struggle with startup costs clearly hit a nerve.

I received more comments, tweets, and replies for this than almost anything else I've written this year. Even DHH weighed in: 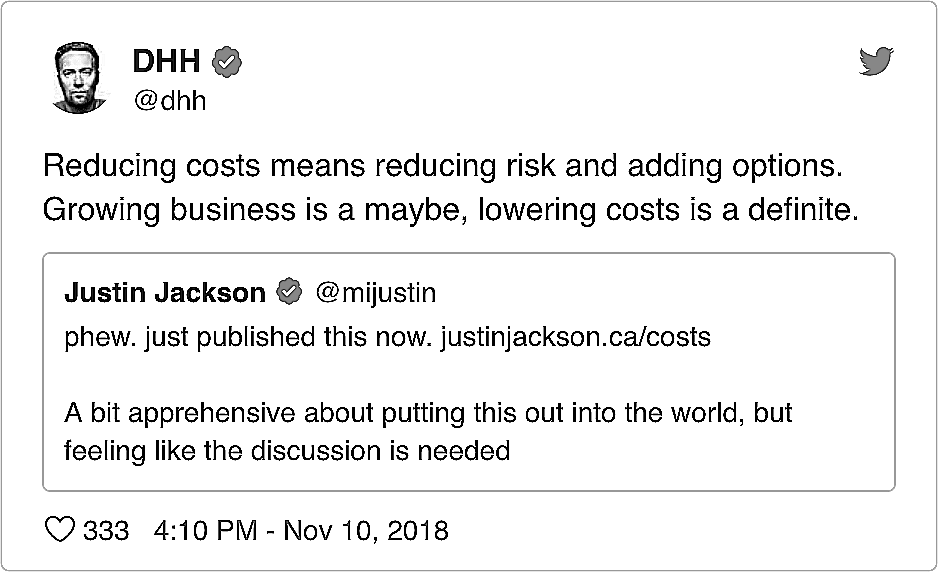 A big part of my article focused on how I'd previously been given this advice:

"It is far easier to create something that will increase revenue by $200 a month than it is to squeeze $200 out of expenses."

I was wrestling with this in December 2017. My gut was telling me to reduce my monthly business expenses.

My ego, however, was saying: "Don't waste time trying to reduce piddly expenses! You're a hotshot entrepreneur. Your time is valuable! Just go out and do what entrepreneurs do: earn more revenue."

Instead of cutting back expenses in 2018, I tried to increase revenue instead.

But, for the first time since 2012, my revenue won't grow this year. 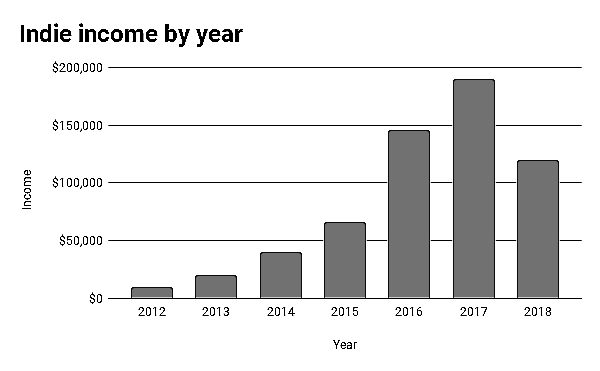 Previously, my slow and steady growth was a point of pride for me. It felt like I'd done things "the right way."

But in 2018, three factors ended up negatively affecting my revenue:

When you're a solo-founder, everything rests on your shoulders. You get 100% of the upside, but you also bear all of the risk. If you get sick, or if something doesn't go as planned, there's no one there to pick up the slack.

One of my readers, Murray, from Red Deer, AB, articulated it this way:

"It's risky being a solopreneur. You're uniquely susceptible to the drag of expenses. If you experience health issues... the company may need to rely on its momentum for a little while. Expenses, are a drag on that momentum when the one and only cylinder falters. Minimizing expenses is the best insurance for keeping a solopreneur's business alive when life gets in the way.​"

Minimizing costs especially makes sense when you consider the scale of a solopreneur's company.

If you're making $500,000 a year, canceling $500 / month in subscriptions might not make a big difference on your bottom line.

Over the years, I'd fallen into a trap that Mike Michalowicz describes in his book, Profit First:

"Increase sales and the profit will take care of itself, right? Wrong. As your income climbs, expenses quickly follow. Money problems occur when sales slow down. Rather than reducing our costs, we scramble to cover ridiculously high expenses."​

When I started my little side-hustle in 2012, I was incredibly frugal. My only real expense was a $10 Bluehost bill!

But as my revenue increased, it was easier to say "yes" to more things: travel, apps, and subscriptions. Before I knew it, expenses had ballooned to an average of $4,400 per month! 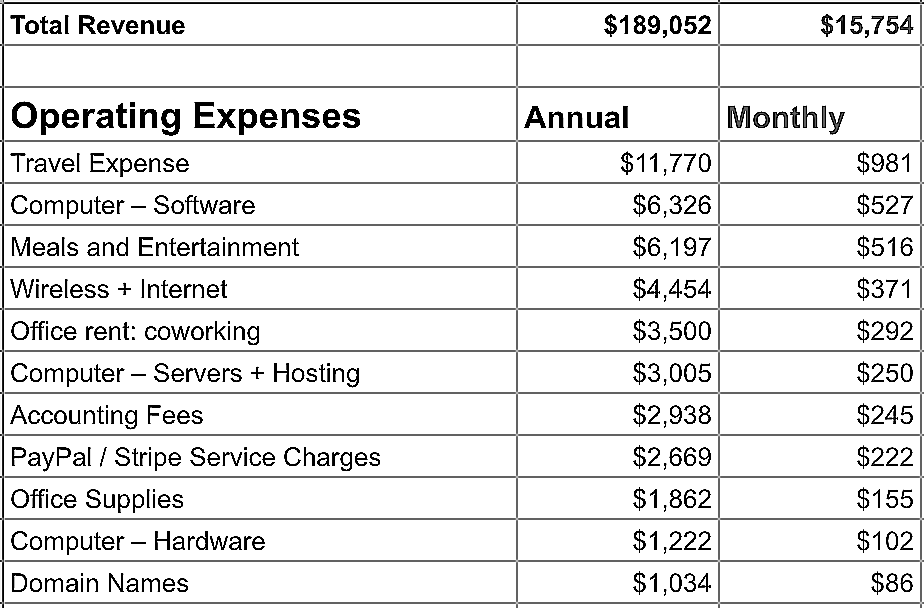 This wasn't as big of a deal when revenue was high. I was able to pay my expenses, and still pay myself a good salary (last year I made about $123,000 in salary and dividends).

But, just as Michalowicz predicted, when sales slowed down, my monthly costs weighed on me like never before.

Judging from all the emails I got last week, many of you are in a similar position.

What I'm doing about it

Here's what I'm doing now to improve my business and my situation.

Remind myself "why" I'm running a business

I resonated with these values strongly. They're the reason I wanted to become an entrepreneur in the first place!

If I'm riddled with debt, I'll lose my freedom, my relationships will suffer, and I won't be able to pursue my purpose. Moving forward, I want to keep the principles of freedom, purpose, and relationships in mind.

Implement "profit first" in my business

I've mentioned Michalowicz , and his book, multiple times now. I haven't read anything else on business finance that so acutely describes the problem entrepreneurs face, and how to get out of it. The system has multiple components, but the main idea is to "pay yourself first."

When you make revenue, don't run out and pay your expenses first! Instead, make deposits in the following accounts:

And that 30% you have left? Use that to pay your bills.

When you do Michalowicz's business assessment, it shows you where your numbers are at now (based on your previous 12 months). Then, it gives you targets you should aim for.

This past week I cut a number of services. Here's a sample:

This doesn't mean I'm going to cancel everything. I'm still happy to pay for things that:

But, I do want to examine my expenses critically.

For example, let's look at business travel (conferences, retreats). Do these events meaningfully contribute to my freedom, purpose and relationships? Absolutely! But if I attend too many events, that will negatively affect my profit margin.

Some of my readers asked if I'm able to reduce my salary.

To determine what's reasonable, the Economic Policy Institute has a Family Budget Calculator. It estimates the cost of living, depending on where you live. (It only works in the USA, but I used Bellingham, WA as an equivalent for Vernon, BC) 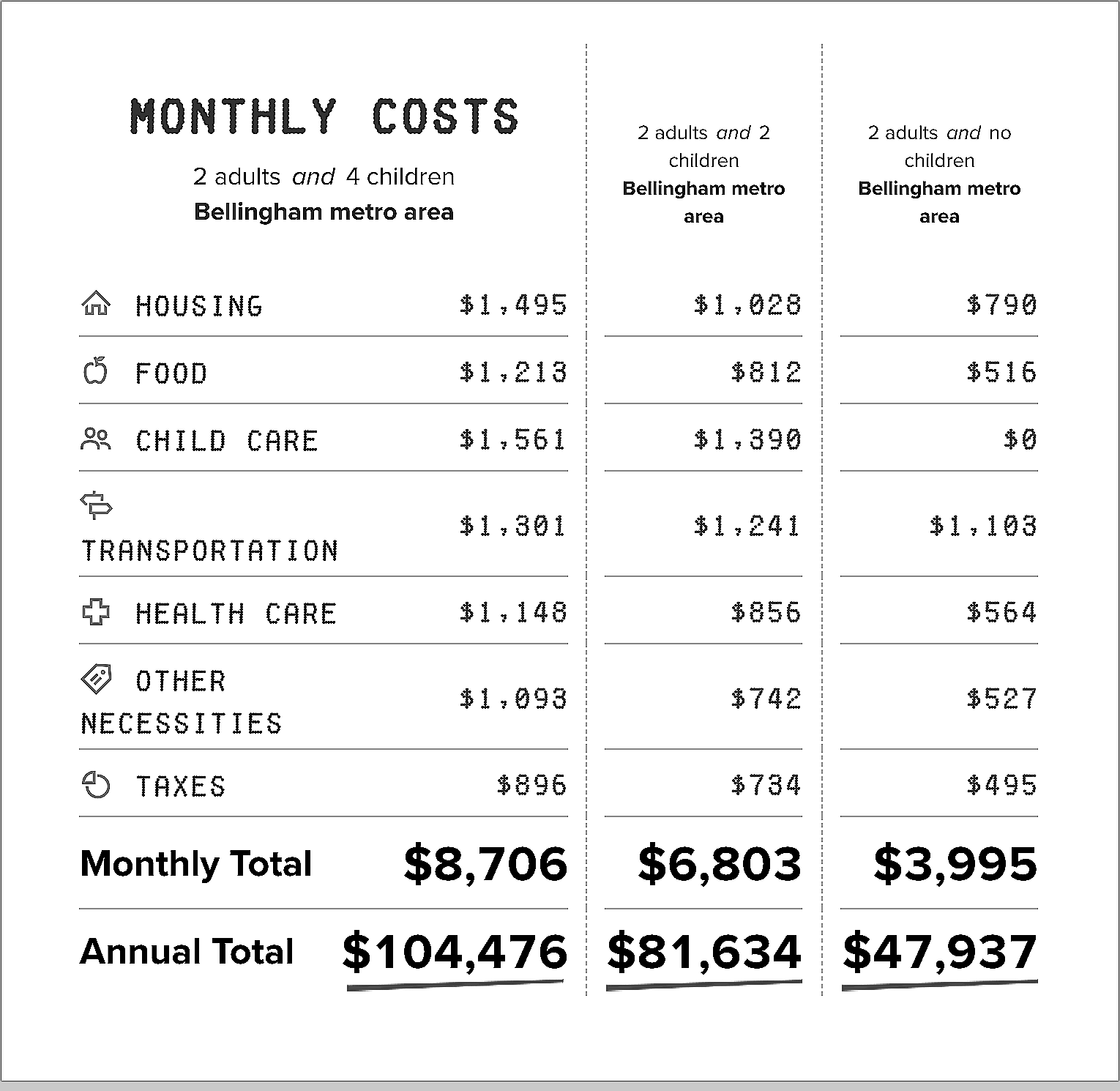 This number is meant to serve as a "minimum standard" to start from. The housing estimate is based on renting an apartment, the grocery estimate is based on the USA's "low cost food plan." It also doesn't include saving for college, recreation activities, or vacations.

The reality is, even if we we adjust our lifestyle to a frugal minimum, we're still going to need at least ~9,000 to survive.

One idea: reduce salary but try to increase profit (and potential dividends). Previously I've just paid myself whatever I wanted, month to month. But, I'm considering paying myself a minimal salary that will stay the same. Then, anything I make above that is a bonus (paid out as dividends).

Yes, growing sales is still part of the picture. I'll be talking about this in a future post.

How else can we manage the risk of being a solopreneur?

Like Murray said earlier: there are substantial risks to being self-employed.

Our best insurance is to create margin for ourselves by:

I hope this is helpful,
Justin Jackson
@mijustin