Someone called me a "pessimist" yesterday.

In this case, they were responding to my critiques of Musk.

But I’ve also been labeled as a pessimist when I share news stories about the climate crisis:

“What’s with the relentless pessimism?” they say, “why not default optimism?”

I spent some time looking at what the word “pessimist” actually means.

I found this great article in The Philosopher, "the UK's is the longest-running public philosophy journal.” I love the way it starts:

In an age marked by such overwhelming cause for concern for the state of the planet and the future of mankind as ours, the word pessimism has received a surprising amount of bad press.

In our society, pessimism is often equated with negativity. So if someone calls you a "pessimistic person," they're likely saying you are negative, unhappy, or miserable.

You see this reflected in comics: 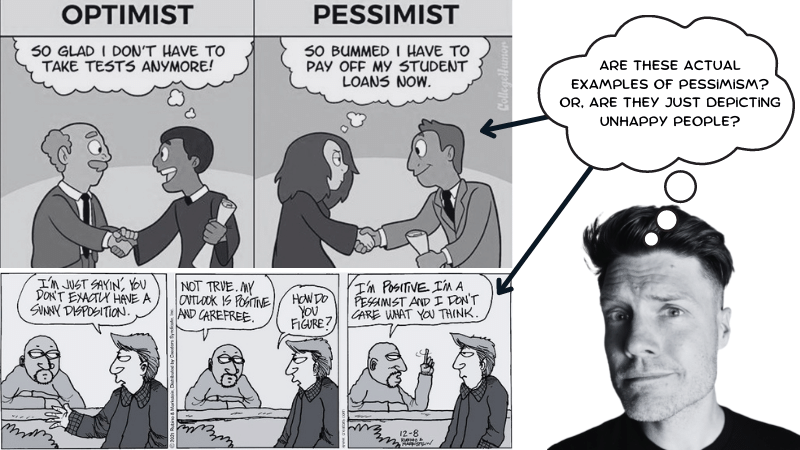 Painting other people as being "overly negative" is sometimes used as an excuse to mute voices that make us uncomfortable.

A popular online trope encourages people to cleanse their social feeds "by removing people who constantly leave behind a trail of negativity." One habit-building app recommended that its users "complete a 'digital detox': unfollow anything that triggers a negative emotion."

But if we unfollow "anything that triggers a negative emotion," how will we confront uncomfortable truths?

Is “pessimism” really the same as “negativity?”

The standard view is that an optimist believes things will get better; a pessimist believes things will get worse ... The problem with the common-sense view of pessimism is that it relies on a mistaken conception. Far from resting in a belief that things are going to get worse, pessimism in most cases doesn’t have to do with the future at all: rather, it is a philosophy that tries to give a place to the reality of evil and pain and suffering.

In Mara's view, pessimism isn't about "expecting the worst" but rather "a refusal to believe that progress is a given."

Do pessimists actually believe their outlook commits them to resignation? Far from it: in fact, in many cases, the opposite is true. Both optimism and pessimism are directed towards a common orientation, which is to make sense of suffering, to offer hope as well as consolation; and to try to improve the human condition.

Her definition stands at odds with how popular culture refers to pessimism: a trait linked "with negativity, a 'glass half-full attitude, depression, and other mood disorders."

She highlights how optimism and pessimism have a common goal: "to offer hope as well as consolation; and to try to improve the human condition."

This duality resonates with me. I don't see myself as an unhappy person: I find joy in many things, and I'm generally hopeful about the future. But I also don't want to ignore life's uncomfortable realities, the things that aren't OK.

We make progress when our eyes are open

When we ignore the things that "aren't OK," they don't go away; left unchecked, they can cause real havoc.

For me, having concern leads to action. "Yikes, that spot looks like skin cancer; I should call my doctor."

You need to detect the cancer before treatment can begin. And, if you notice a skin spot, you shouldn't pretend it doesn't exist. Things don't just get better on their own; we need to act for treatment to work.

I understand that people want to avoid negative feelings: the inner lives of humans are already fraught; grappling with more can feel overwhelming.

However, it's better to face those uncomfortable feelings in the long term. Ignorance may be bliss for a short while, but eventually, the repercussions catch up with you.

I want things to improve; for the world to be better. I'm cheering for indie makers. I wish for continued human progress. I'm hoping for good things in my children's future.

But we can only make progress if we're honest about our present condition. We can only navigate forward once we have a clear-eyed view of the world.

"The bus driver is drunk"!

For example, someone might point out: “Hey, the driver of this bus is drunk!” A cartoonishly optimistic reply would be: “Stop being so negative; let’s see where he takes us!”

The point of pessimism isn't to cause distress (or "to be a downer") but rather to show concern in the face of danger and suffering; this includes calling out our leaders when they're causing harm.

Mara echoes the downside of being too optimistic:

It could also be said that, if we are too optimistic, too convinced that things will turn out fine in the end, whatever we do, we’ll equally end up doing nothing. Why worry ourselves about a complex problem such as climate change if we already believe everything will sort itself out in the end; that progress will prevail?

In the same way that one can be overly pessimistic, one can also be overly optimistic. A gardener, for example, doesn't just throw their seeds on any soil thinking, "this will grow just fine." Instead, they assess the state of the earth before they start planting. If the ground is cracked and dry, it will be inhospitable to anything good we try to grow.

There's still an unresolved question: "how much pessimism should we express publicly?" How should we balance our optimism and pessimism?

In her essay, Mara shows us how to hold these opposites in tension:

there is much to be said for an optimist ethic that tells us to look for the good, the lighter side in all things; one that warns us against focusing too much on what Schopenhauer calls “the terrible side of life”, lest we lose heart and hope, lest we forfeit our capacity for goodness and kindness and for joy itself.

She compels us to balance hopefulness and concern.

“Such an ethic,” she continues, “would remind us that we must always believe, even in the darkest of times, that things can get better.”

It’s unwise to define ourselves as primarily optimistic or pessimistic. Certain situations might call for an optimistic response, while others might require pessimism.

I’m concerned about the impacts of climate change, the extreme polarization we’re seeing in democracies, and the toxic leadership of some business and political leaders. In these areas, I don’t feel like “progress is a given” and that we need to confront the difficult realities of our time.

But overall, I’m optimistic about the future. I hope that humans will come together and mitigate the worst effects of the climate crisis. I’m hopeful that our democracies will survive the current threats. I believe we can improve the lives of many more people if we work at it.

We should look at optimism and pessimism not as an identity but rather as two appropriate modes of response.

How to make the world a better place

If we’re going to help make the world a better place, we’ll need open-eyed honesty about how things are. We’ll need to admit that some things aren't right.

I want to have a positive impact on the world (I’m sure many of you do too).

Progress isn’t a sure thing; let’s not take it for granted.

Let’s move forward with a hope that’s grounded in reality.

PS – if you'd like to dive deeper into this topic, Katelyn Bourgoin recommended an awesome podcast episode: "A better way to worry." Here's the link on Overcast.

Here are some of the replies to this post I've receive so far:

Thanks for sharing. This certainly makes me think. The idea that "pessimism == negativity/unhappiness" has indeed been put into our brains by the media.

I myself am guilty of accusing my spouse of being overly negative/pessimistic quite often. Maybe I'm being slightly unfair to her. Will have to think more about this.

"A pessimist is a well-informed optimist."
– old proverb

I am a long-time reader and first-time responder; this article definitely struck a chord with me.

Too much of anything (pessimism or optimism) is a problem, and the key is to always find balance in life. My biggest takeaway: things need to be questioned and analyzed. I've always told people that my 6 best friends are who, what, when, where, why, and how.

I think "concerned optimist" would be the right term. Pessimism points at the doom and argues against any solution.

Optimism sometimes gets confused with being naive or carefree. I think an optimist is aware of the possible downfall, but employs every resource to overcome, including having above average faith and belief.

I consider myself an optimist, but that doesn't mean I don't realize things are shit when they are. It's more like "yeah this sucks, but we can (have to, will) make it right".

I have an immense belief that humans are generally good, and the larger view of history shows we're generally moving in the right direction. Not everywhere, and not always, and not as fast as we could've - but still [in a positive direction].

Just want to say that I appreciate your thoughtfulness. So many people in tech are, imo, overly optimistic only because their frame of reference is so limited. They only focus on tech and so, if you're only looking at, say, developments in front-end frameworks, then sure, things are getting better. This kind of myopic utopianism is so frustrating. I'm glad that a few people, like you, who work in tech are also able to recognize that things aren't always perfect. And this is especially true when you look outside of the privileged world of tech. So, thanks for being pessimistic. I, for one, appreciate your pessimism.