Can you bootstrap a startup on the side?

Last week, I was skiing with my family.

The chairlift is often where I do my best thinking. As I was heading up the mountain, this thought popped into my head:

The founders of MailChimp waited six years before going full-time on their SaaS. In the meantime, they were consulting, allowing app revenue to grow on the side.

I realized this was true for other bootstrappers I admired too: Todoist, Wildbit, Basecamp.

Instead of heaping expectations on our new startups, what if we just give them time to grow? Instead of hustling for immediate growth, should we focus on slow, steady gains?

When I got back to our hotel for lunch, I tweeted: 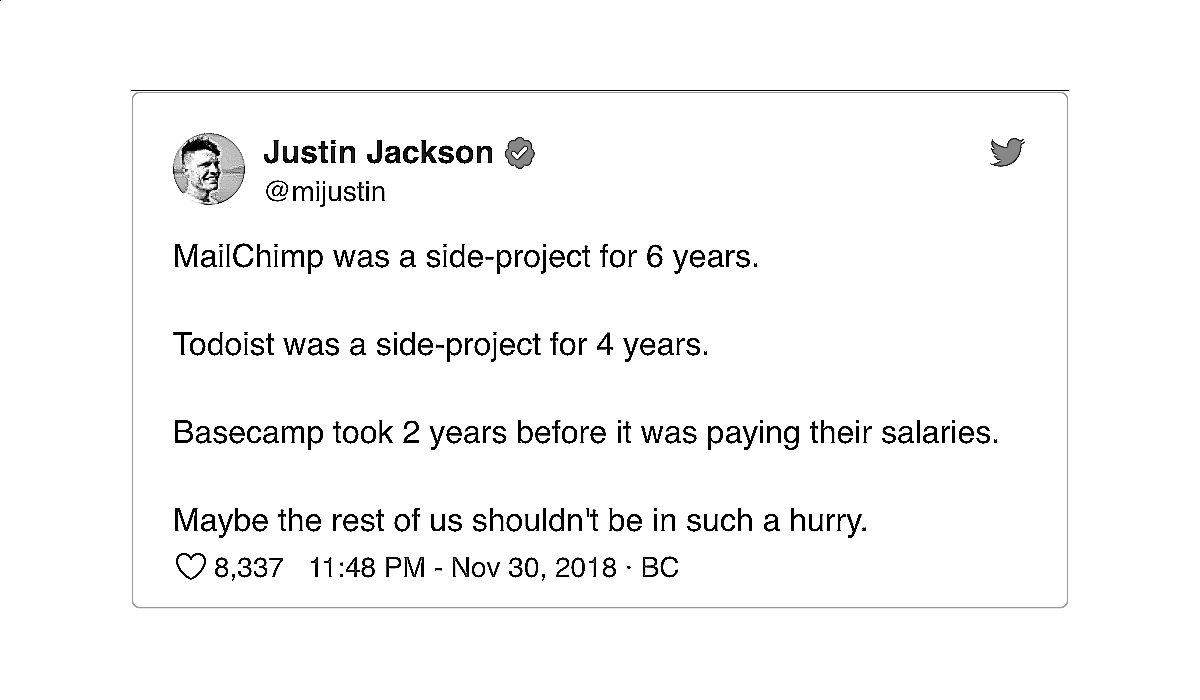 That tweet exploded. It struck a nerve. People began to reply with their personal startup stories.

"It took six years to move Fences from pet project to general availability. And then six years of hacking on back-burner to find profitability. Twelve years in all, 2/3 of which was patience."

Jonnie Hallman said his app for freelancers is just now at a point where they’re finding their footing:

"Approaching year 5 with Cushion and I have a feeling this is our year."

Rob Belcher mentioned that his finance firm had done a study on the topic:

Our data from a survey of ~950 B2B SaaS companies showed that the median time to $1M ARR is six years.

These responses got me thinking about Transistor, the podcasting platform I co-founded with Jon Buda. We launched four months ago, and just passed $4,000 in MRR:

It's been exciting to build and grow our app on the side. But it's also been hard. With hundreds of paying customers, we're dedicating more of our time to serving them. But, the business isn't earning enough to pay us for our time.

It's been particularly challenging for me. Since 2016, I've supported myself with M4Devs and other courses. But my revenue's fallen this year as I've dedicated more time to Transistor.

Sidebar: the online course business is very launch-driven. Producing new material is what drives sales. But creating that material requires a ton of energy and focus (6-12 months). The folks who do well in this space (like my friends Adam Wathan and Wes Bos) dedicate a significant portion of their time to producing new content. It's hard to grow a SaaS and launch a new course every year.

So, as 2018 is winding down, I've been exploring my options:

1. Work on Transistor on the side, but get a job/consulting so I can pay my bills consistently.

In the past, I've done product marketing for other tech companies, and made a good living at it. Maybe, having a few consulting clients is the best fit for me right now. Jon could keep his day-job, and I'd have a more reliable income stream.

This "slow and steady gains over time" approach also feels calming. It removes a lot of pressure for us to "grow fast so we can pay ourselves right away."

2. Take investment so we can go full-time sooner.

There are some new funding options in the bootstrapped space. Earnest Capital and TinySeed seem tailor-fit for founders like Jon and me.

3. Keep things the way they are.

Or, we could keep our current path. There's a lot of tension, but maybe we can sprint hard, and acquire enough customers to go full-time sooner?

These are the questions that have been circulating in my head over the past few months.

Which is why when Jason Cohen, founder of WPengine and someone I respect, replied to my tweet, I took note:

It’s difficult to find successful companies where founders didn’t work 80+ hours and took longer than four years to get to $1M ARR. If you're two years in and you still need a day job then by definition it doesn’t have good fundamentals. I usually think of "$10k/month/founder" as a rough measure of whether you're ready for full-time. Saying that should take three years is wrong. It's hard to find that companies that live and took that long.

Initially, this was difficult to read. It seemed to contradict my earlier theory that "startups that grow slowly on the side do just fine." Also, it made me question the traction we'd achieved so far with Transistor. Were our fundamentals strong enough to keep going?

Sidebar: I'm not mad that Cohen tweeted this stuff. I want my worldview challenged! However, it is tricky processing all these signals. Below, you'll see the process I used to sort this out and come to my own conclusions.

One of the first people I reached out to was DHH. His journey with Basecamp has always been something that inspired me. I met him in Chicago years ago, and occasionally ask him for advice.

He wrote me a really thoughtful response. I won't share the whole thing here, but here are a few highlights:

When David looked at Transistor's numbers, he said:

"If you're at $4K MRR, it feels like there's something there. But if you don't have any meaningful growth behind it, it won't work. Don't forget that virtually all companies fail in the grand scheme."

I don't think you can launch something and then just let it sit. But if you can spend 10-15 hours per week on something, that's a meaningful investment of time. It can absolutely change the trajectory of the business.

Who's right? Cohen or DHH?

Here we have two tech titans, with differing points of view.

To start, I think everyone agrees on a few things:

The main point of contention between DHH and Cohen seems to be how many hours of work a week are required to build a company.

It's possible that their debate is just a matter of founder preference; and what type of company each wants to build.

Jason Cohen builds businesses in an intentional way. He vets his ideas systematically. He wanted to create something big. WPengine has hundreds of employees, multiple offices, and $290.7 million in funding.

DHH and Jason Fried have built Basecamp purposefully as well. They've deliberately kept their team small. They're trying to be a calm company.

Applying this to our startup

So, what does this mean for me, and growing Transistor?

My first step was to get a few experienced founders to look at our numbers. (They're currently on Baremetrics here).

"So far, these are looking pretty good. You're not doing crazy growth numbers or anything, but the fundamentals look good. You're growing MRR every month, and don't have a lot churn. Keep growing this and see where it goes."

"You just need to give it more time and focused work. Transistor has solid numbers."

Getting our numbers checked was a reassuring step. Knowing that we're on a reasonable trajectory, at least so far, gives me the confidence to keep going.

However, the biggest lesson from this experience came from a mentor (who wished to be anonymous). He said:

In entrepreneurship, there is very seldom a single truth. A single right answer. If anything, seek your truth in a given situation. Think to yourself: "if I look back on this decision in 5 years, did I do the right thing based on the information I had at the time?"

Other founders can offer advice, but only we can decide what's right for us, and our company.

Transistor's had a good start. It's showing potential. Next, Jon and I need to figure out a runway (and a growth pace) that works for us. We want to be serving our customers for a long time; there's no sense in burning out now!

Your startup is your company. You get to decide what its purpose will be, and how you're going to get there. If the fundamentals are there, do it your way.

PS: I wrote a follow-up to this post. I also ended up doing a Skype call with Jason Cohen after this article came out. You can listen to Part 1 and Part 2 here.