How many trials should I be getting for my SaaS?

One misconception I see from new SaaS founders: they need more trials than they think they do.

Many of us got our business start in consulting. When you're selling your time, you can only handle 1-2 contracts at a time, so getting a handful of leads every month is fine.

But the fundamentals of SaaS are different: you can't dedicate significant resources to nurturing just a few leads a month.

SaaS is more akin to selling cups of coffee than selling heavy-duty machinery. You want to see a lineup of people queuing up for your product every day (like at a coffee shop). Otherwise, you're selling enterprise software (which is fine; just a different model).

The risk, for new SaaS entrepreneurs, is committing to an idea that doesn't have sufficient demand, and then trying to turn a small wave into a big wave.

"As someone who just shut down a SaaS that targeted SMBs, this is a fantastic and accurate thread. You can trick yourself into thinking you’re doing ok with a few trials per month, but you’re actually floundering." – Justin Hunter

Now, I'm not saying you should be getting hundreds of trials right after you launch. Almost every app gradually ramps up over time. But eventually, you want to see a good number of trials.

Here's how it looked, in the beginning, for Transistor.fm: 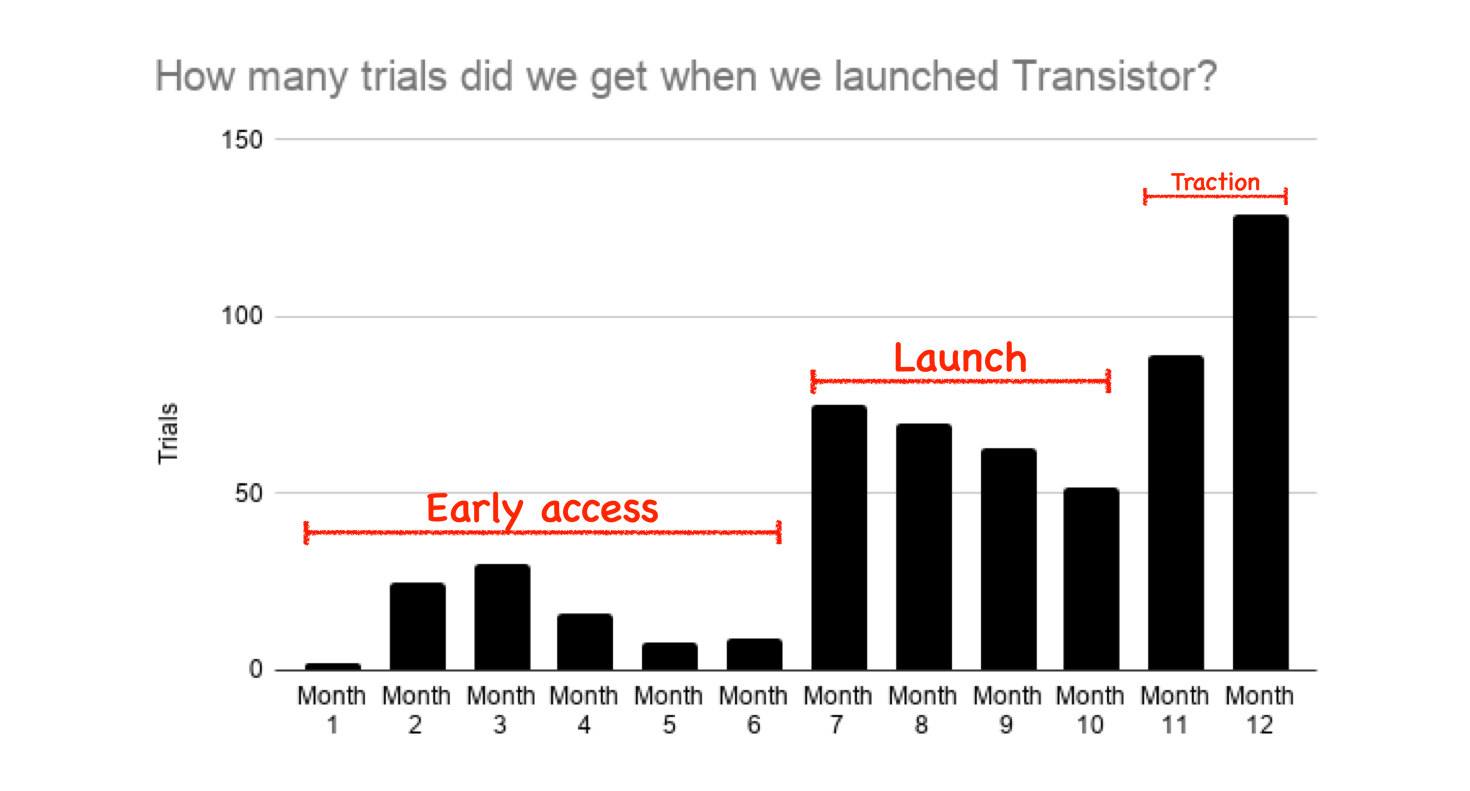 "Getting the distribution model right so you're doing very little one-to-one selling and keeping pricing complexity to a bare minimum are keys. If you need multiple calls to close a $99 MRR deal you're in trouble." – David Colby

Garnering from my own experience, and other bootstrapped founders I've spoken with, hitting 200-500 trials per month is where the business feels like it's working. For Jon and me, it's when we went full-time.

Having a credit card upfront is helpful at the beginning because it makes your trials more meaningful. If people sign up with their credit card, it shows that there's demand. They want what you have to sell (they're not just kicking tires).

In the past, I've used these conversion benchmarks (which I garnered from Rob Walling and Patio11 over the years):

(This is for credit card upfront)

Every product category is different, but if your tiers are $19 - $99/month, and you ask for a credit card upfront, at 200-300 trials per month you'll have a pretty good business (assuming conversion is 40-60%).

The message is always the same: look for a hungry market that is actively pursuing what you have to sell. Once you've found the right distribution channels, you should be seeing hundreds of trials every month.