Thanks for reading and responding to last week's article (The hidden cost of bootstrapping).

Many readers shared their story with me:

Where'd you get your money?

The untold story behind many successful bootstrapped companies is this:

They didn't fund their company from customer revenues.

This seems to contradict the popular narrative of what "bootstrapping" means. On Indie Hackers, M. Naus says:

"Bootstrapping means using nothing but revenue generated by your business to grow it."

But is this realistic? Is this really how our predecessors grew their businesses?

Where Basecamp got their money

We know that 37signals was doing consulting while they built Basecamp (we'll cover that in a future newsletter).

But many folks don't know about the other way they funded their company. 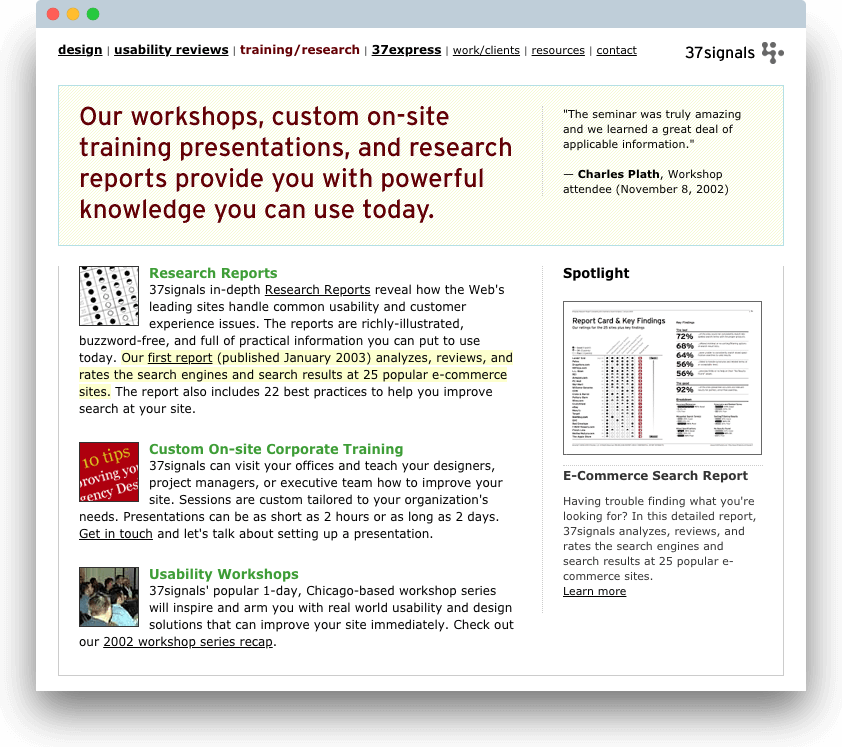 While they were developing Basecamp, 37signals was making additional income from:

In the early days, Basecamp didn't have the single-product focus they have today. They were hustling to survive!

They were diversifying with multiple streams of income, and selling training was a big part of that.

We can see the results of these efforts in Jason Fried's annual review:

Could this be a path for us to bootstrap our businesses creatively?

Why bootstrappers should teach; for fun and profit

Imagine you got a call from the biggest conference in your space (SXSW, MicroConf, Laracon, PAX).

You're ecstatic. You'll be in front of hundreds of potential customers.

But... you're still not sure. Writing and practicing a talk takes a lot of time (time you could be investing in your product).

Would you do it?

The opportunity to connect with potential customers, plus the additional revenue, is compelling.

Creating a course, writing a book, or doing a workshop is similar.

Yes, it takes time to develop these assets, but when you do, there are many benefits.

1. Teaching forces you to start small

How do you want to make your customers' lives better?

Basecamp is software that helps small businesses improve the way they work.

But before they built software, they did workshops that had the same aim: "help small businesses improve the way they work."

They've been helping customers make progress on this same topic for years! (Even before they built software).

Most of the problems we hope to solve with software can first be addressed manually.

2. Make sales now (instead of later)

Believe it or not, getting five people to pay you to attend a one-day workshop is more accessible than selling software to anonymous people on the internet.

I've been selling SaaS since 2008 (at Mailout, Sprintly, and now Transistor).

Yes, selling apps is more scalable, but nothing beats the effectiveness of:

Arguably, it's the lessons that you learn "hustling on the street" that help you to scale your marketing efforts later on. (Which pitch resonates most with people?)

Learning how to sell doesn't just happen. It takes practice. And selling a course, or a workshop is a great place to start.

3. Build your audience now (instead of later)

Many of you told me:

"I'm interested in building an audience for my launch."

Growing an audience takes time! But, you can start to earn people's trust now by teaching them.

In 2012, I bought a book called "Designing Web Applications" by an author named Nathan Barry.

The next year, he launched his web app, ConvertKit. I signed up for that too, and now I'm his longest running customer.

As you focus on one audience, and you keep solving their problems, you'll build momentum. Your audience will grow, and when it's time to launch a "serious" product, you'll be ready.

4. Earn revenue and fund your company

Alex, the founder of Groove, tells a story about how his software company nearly went bankrupt:

"In those early days, Groove was struggling to stay alive. We simply weren’t making enough to pay our bills, let alone invest in improving the business."

To survive, Groove had to do things differently.

One thing they tried, in 2017, was running a six-week course. To Alex's surprise, all of their spots sold out. In total, the session raised $120,679 for the company.

It's true: not everyone is going to hit those big numbers.

But, in your early days of bootstrapping, every bit of revenue helps. An extra $500 or $1,000 can make the difference between burning out, and living to fight another day!

What should you teach?

Regardless of whether you're employed, freelancing or you've already built a product, the following is true:

People are paying you for your skills and expertise.

Your work helps people make progress in their lives. You've probably learned what works, and what doesn't. You've discovered, through experience, how to be more effective.

This means you have the potential to teach others what you know.

Another good source for material is to look over any talks you've done (or blog posts you've written) that got a lot of traction.

Regardless of what you teach, make it good.

Set a high bar for quality, usefulness, and value. Your initial students will remember and could become lifelong customers for your software product.

(Sidenote: I just looked at Transistor's first 12 customers. 75% were folks that had previously bought one of my courses)

What's the best way to get started?

Doing a workshop is a great way to start. Begin with a small group of people, and gradually build up to larger groups.

One hack I've found that works, is starting with Meetup, and doing a free event to practice your material.

Jon and I recently were in Chicago and put up a Meetup event last minute. We didn't promote it at all, and six people showed up!

After you've practiced your outline (for free) with a Meetup group, try doing a paid event.

Another idea that's worked for me is getting your local Chamber of Commerce or trade organization to sponsor an event. They're often looking for high-quality workshops to share with their members.

Create your own seed fund

Getting that money comes with all sorts of strings attached:

Also, just finding and making those deals can take a considerable amount of a founder's energy.

Instead of spending your time trying to convince an Angel to give you $10k, why not earn it yourself?

You'll be in good company: experienced bootstrappers like Jason Fried and Nathan Barry used diverse income streams (like PDF downloads and workshops) to fund their products.