Josh started out trying to build a "GitHub for music." When that idea didn't pan out, he still wanted to do something with Web Audio and WebRTC. So he started building Zencastr, which gives podcasters the ability to record "double-ender" interviews in the browser. 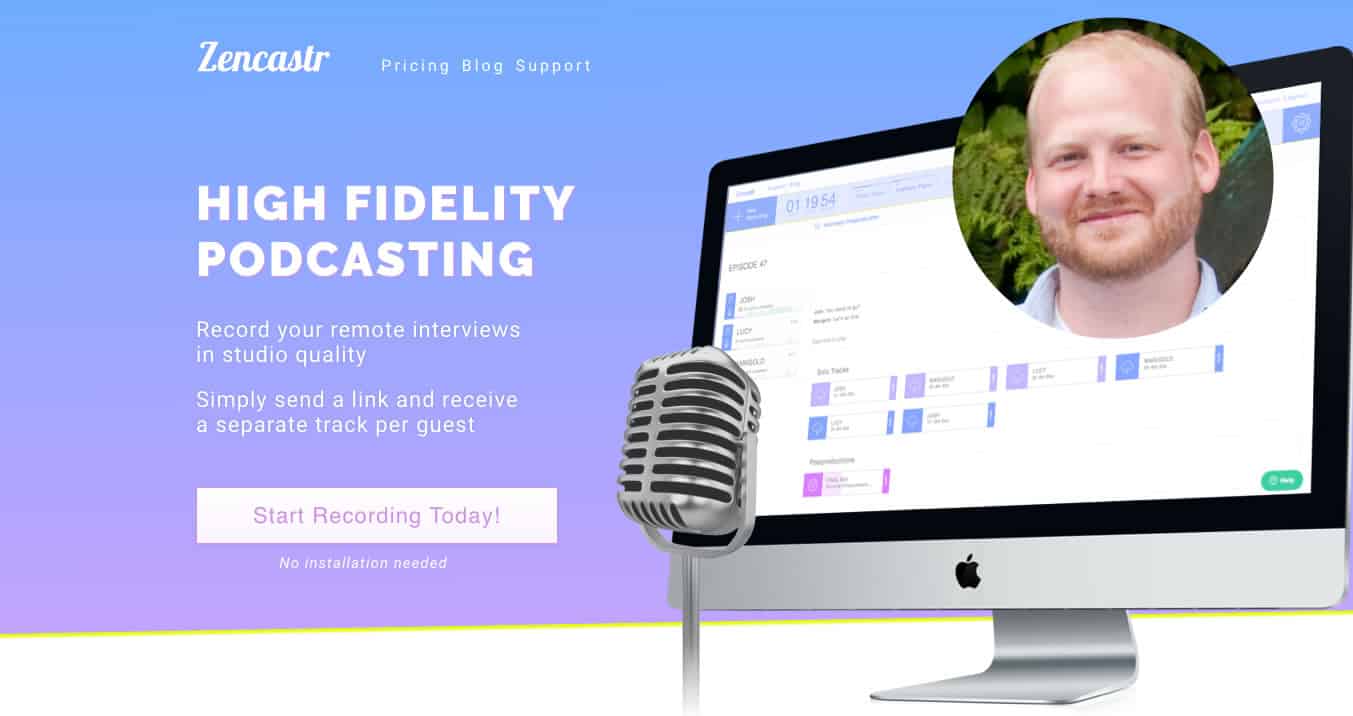 What's the name of your business or product?

Zencastr helps podcasters easily record both sides of an interview, with studio quality.

When did you start working on it?

"Initially I was trying to build a GitHub for music, called Soundkeep. I pitched the idea at Techstars. One of the mentors mentioned that podcasters have a problem with recording "double-enders" in Skype. It was November, 2014."

"In a way, I got lucky. I was in the right place at the right time."

What did your journey to profitability look like? What were your biggest struggles?

"I didn't launch until May, 2015. I had no waiting list. Sent out the link to a few friends. Nobody knew, nobody really cared. Early feedback was really rough. Nobody was really using it initially, so I went on Twitter and started searching for people swearing at Skype and I would tweet to them."

"It wasn't until November, 2016, that I took it out of beta, and started charging people for it. I ran a free beta forever. It's tough, people don't care if your software works 86% of the time."

"The only reason I officially launched when I did was because I got pressured into doing a TechCrunch post. The article ended up being terrible; I'm never working with them again. TechCrunch readers aren't really my target market. They didn't do very good research. They used my old artwork. Product Hunt had a bigger impact for me."

"So, after I launched officially, I started getting people signing up for paid accounts. The first month, I think I did $12,000 in monthly revenue. I had been building up for a long time, I had something like 10,000 registered users. About 600 of those got paying customers."

How did you choose a price?

Is there a certain type of person that buys Zencastr?

"One thing I've learned is that there are different categories of users. You have the 'brand new' podcasters, and they want to say something. You have folks who have been podcasting since day 1, and have a $20,000 studio at home."

"In terms of business mindedness, there are college kids who just want to talk about League of Legends. That's why I keep the free plan. Then I have business users, who have a side-business or a side-product, and the podcast is a funnel for their business."

So, most of the folks paying for Zencastr are people with a business or a product, and they're using their podcast as a marketing channel. These are business people, it's another way to communicate their customers.

"More and more, a podcast is just another facet of your marketing strategy. You're going to need a blog, a podcast, and social media. It's a box to check. You have to make it easy for those folks, because it's not their whole life. It's business users who only have 45 minutes of time."

How much profit does your business currently generate?

What did you learn? What advice would you give aspiring SaaS folks?

"I really underestimated how much time support requests would take. There were definitely weeks that went by where I was just answering customer support, and not making progress on the product. Now I have customer support reps that help me."

"Podcasters churn a lot. It takes a lot of work to keep a podcast going."

"Justin Jackson did some marketing consulting with me. He gave me a lot of advice that I haven't had time to implement yet! There are lots of actions I could take that would definitely increase sales."

"It's really hard to hire for something you haven't personally done yourself. I have to dig in and learn the activity myself, and then I can hire."

How are you planning on improving your business this year?

What do you think aspiring product people get wrong about building profitable products?

Listen to the full interview here: