When you're building a product, whose opinion should you listen to?

It's hard to make things that people want.

A band might record an album hoping their fans will love it. But when they release it, it doesn't sell.

A software company releases a new feature thinking it will hockey-stick their growth. But when they deploy it, users complain.

A blogger pours hours of research into a single post. But when he hits publish, he doesn't get any traffic.

Nobody wants to be out of touch with their audience. But it happens all the time. Even big companies make these mistakes.

A story about unmet expectations

In 2016, developers, video editors, and other pro users were eagerly awaiting Apple's refresh of the MacBook Pro.

However, when they got their hands on it, it was clear Apple had missed the mark.

"In all my years of using Apple products, I have never returned one. Until now. Last month I purchased the new MacBook Pro with Touch Bar. What a letdown. It's the first Apple device that's actually made me less productive. The company has lost touch with Steve Jobs' vision for simple, elegant machines." – Michael Hyatt

Why did Apple lose touch with their customers?

I think they just weren't listening.

To me, the most important aspect of the MacBook Pro is the "pro" part. This laptop should be a no-compromise workhorse for getting your business done on the road. I've been reading the rumors of what may be coming and going with some trepidation. Like many pro-level MacBook users, my biggest concern isn't about what Apple is adding—it's what might be taken away. I chose a Pro because it gives me the power, the ports, and the keyboard to get all of my work done.

Of course, there are many differing perspectives on Apple's products.

How could they know which voices to listen to, and which to ignore?

When you put anything out into the world, people will have opinions about it. And, to make things more confusing, everybody wants something different.

Why? People value different things depending on their context.

Even these examples are too general because a person's context has multiple dimensions. Some college students are wealthy. Many programmers are assigned computers by their employers and don't have a say in what they get. Most gamers prefer a desktop machine because it's easier to upgrade individual components.

So, you could ask a programmer "what's your dream laptop?" and they might give you a truthful answer. But, if their boss is buying the computer, it might not matter what the programmer thinks. Unless the boss is a good boss, in which case the programmer's opinion matters quite a bit.

Do you see how this can get complicated?

Who you listen to matters quite a bit.

I'm going to give some very general advice, and some of you might disagree when you hear it:

When it comes to product feedback, only listen to the people paying for your product. Explore their context; find out what's important to them.

I know some of you are screaming: "BUT SOME USERS DON'T PAY FOR THE PRODUCT AND THEIR VOICES ARE STILL IMPORTANT."

I agree with you. I too want to build products that benefit the actual users.

But, look at Facebook and Google. Many of us use them every day, but we don't pay for them. Advertisers do. Facebook and Google don't seem to care much about our privacy. They'll track us, and share our information without our consent. Why? Their allegiance is with advertisers.

Ultimately, a business serves whoever is paying them.

Let's go back to our laptop example.

Joel Spolsky is the founder of Fogcreek Software and has probably bought hundreds of laptops. If you were trying to sell him your computers, you'd want to read his blog and figure out what he values. In his case, he cares about treating developers well. He wants to give them autonomy. He'll let them choose their machine and the tools they use.

Ready to put this principle into action? Here are the steps I recommend:

1. Serve a customer you care about

You need founder/market fit with the people you're serving; product/market fit isn't enough.

Don't sell laptops to CTOs who don't care about their developers! If you don't respect the person paying you for your service,

"Giving a damn" about your customers is a substantial competitive advantage.

2. Only take product feedback from people paying for your product

The opinion of random people on Twitter's doesn't matter. Likewise, don't listen to folks who keep saying they'll buy your product, but never do. Their opinion doesn't matter either.

Famously, Jason Fried said he only listens to feedback from customers who just bought or people who just canceled.

A customer who just signed up can give good feedback for this reason: they're only recently removed from the buying process. Because of this, it's easier to get useful information about why they bought your product, what emotional event caused them to look for it and which part of it is actually useful for them.

Similarly, a customer who just canceled can tell you exactly what you're missing. They signed up and put their credit card information in because they thought you would be able to do a job for them. If they cancel, your product didn't deliver what they expected.

Don't build features for people who aren't paying you! Don't try to please folks who haven't proven that they're willing to be your customer.

Are you a brand new startup with no customers? Jason advises that you talk to people who are paying for your competitor's product.

Get close to the customer, and observe how they're using your product.

I'm one of those people who didn't upgrade to the new MacBook Pros. Why? Here's what my computer looks like most days: 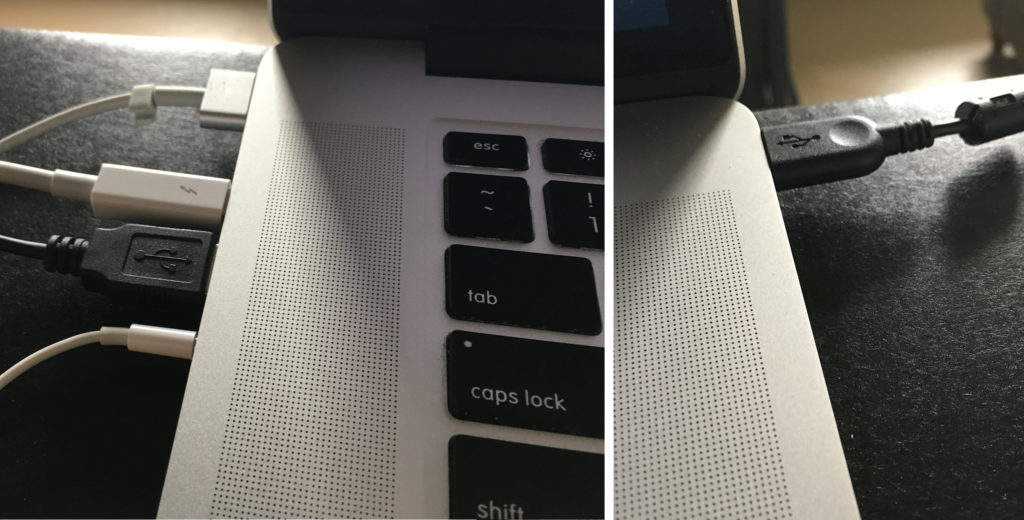 If Apple had paid attention to how I, and many other pro customers, use their laptops every day, maybe they would have thought differently about what they offered in the new MacBook Pros.

Recently sold my 2017 13" MBP (for a profit), and went back to my 2013 13" MBP. Keyboard was too shallow, TouchBar was pretty useless, and no noticeable boost in performance. It was a beautiful machine though.

It feels great to have a "normal" keyboard and USB 3 ports again!

4. Listen to your customers

Beyond observing your customers, you should also do customer interviews. Ask customers questions: What are they struggling with? In what ways do they want their lives to be better?

Going back to the MacBook Pro example, we saw many Apple customers stating: "This is what I wanted, and I'm disappointed by what I got."

Users wanted more memory, more power, and a full-size keyboard ("Don't take away my ESC key!"). Many folks wanted that SD card slot and more ports. But what they got was a thinner, lighter machine with a touch bar. That's why there was so much disappointment.

For years, Apple produced a MacBook Pro that users loved. But, in this case, they got it wrong.

Their example shows how difficult product/market fit is.

Customers are a moving target; their context and desires are continually evolving. Our job is to listen.

You can listen to an initial draft on the MegaMaker podcast:

Subscribe to my newsletter and get notified whenever I publish something new: