Back in the Spring of 2015, I was chatting with Nathan Barry.

He'd recently decided to leave his info-product business behind, and double-down on his SaaS (ConvertKit).

At the time, the decision seemed ridiculous to me.

I was working as a Product Manager for Sprintly but had just published Marketing for Developers. I was eagerly anticipating a time where I'd be able to quit my job and go independent.

To me, Nathan was living the dream. The year previously he'd done nearly $300,000 in revenue from books and courses. 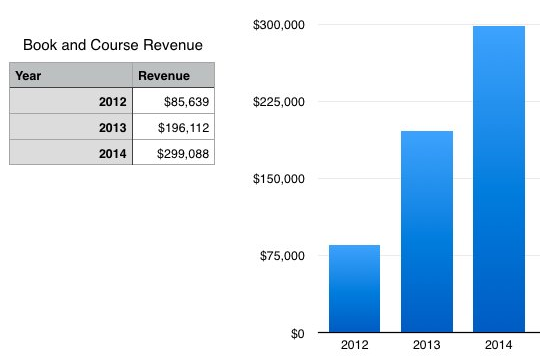 As someone who was looking on longingly from the sidelines, I couldn't imagine leaving that kind of business behind.

When I asked him about it, he replied:

There’s a bunch of reasons I decided to focus on ConvertKit. First, I needed a challenge. Second, I know people that have gotten to half a million or a couple million dollars a year in revenue off books and courses. And when I look at their business models, I just don’t like it. To get to $1 million in revenue you have to optimize just about everything. It’s diminishing returns; it’s like squeezing blood from a stone. To drive more revenue, you have to do more launches, and hire more people. Folks that are winning at info-products have huge monthly expenses and lower profit margins. With SaaS, I saw a substantial business I could grow for a long time.

I followed Nathan's playbook, and went independent in 2016, using Marketing for Developers and MegaMaker as my platform. In 2017 I added Tiny Marketing Wins to my product mix. 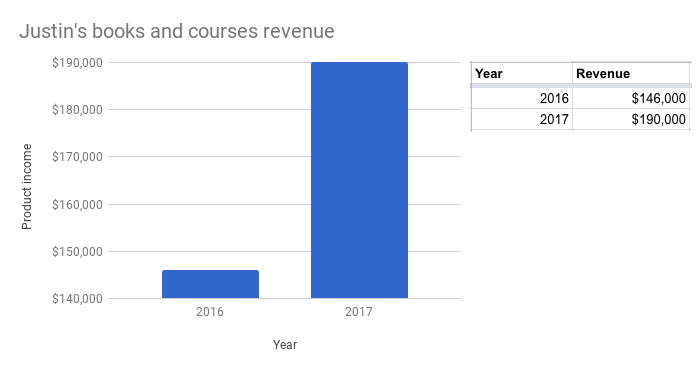 But something else happened in my second year of business. Something I didn't expect. I got depressed. For the first time in my life, I was dealing with intense mental health issues. There were weeks where I was only able to work five hours total.

There was a huge downside to solopreneurship that I hadn't considered: when you get sick, there's nobody else around to keep your business running. Most of my marketing, video tutorials, and coaching require me to be charismatic and energetic; there were many days where I just couldn't.

When the year ended, I was mentally and financially drained.

Thanks to therapy, I'm feeling a lot better now. But the experience moved me.

The past two years have taught me some valuable lessons:

It's called Transistor.fm. It was started by my friend Jon Buda, in Chicago. I'm coming on as his co-founder.

Jon and I were introduced in 2014 by our mutual friend Chase Reeves at XOXO in Portland. Here's a photo from the day we met:

At the time, I was writing Marketing for Devs. Jon was working on a podcasting app with someone else. He invited me to host my podcast with him.

Before we left, we said: "Let's build something together someday."

Jon's first partnership didn't work out. He eventually got a job doing full-stack web dev in Chicago. We kept in touch and met up again in 2015.

In June 2016, we tried building a community platform. Ultimately, we decided not to move forward with the idea, but it gave us a chance to work together.

Finally, in December 2017, Jon told me about a new podcasting project he'd started: Transistor. He was getting tired of working on it by himself. I was tired of working solo too. So we started talking about partnering up.

What is Transistor.fm? How does it compare to other podcasting hosting apps?

Businesses like Basecamp, eBay, and Code Pen have discovered the power of having a branded podcast. Instead of running ads on someone else's show, they're investing in building their own audience.

We want to make Transistor the best way to create a podcast for your business.

We already have users!

Cards Against Humanity was our first paying customer. Their show, The Good News Podcast, is hosted on Transistor.

Since launching the beta in December, we're hosting a handful of shows, and have already served 2 million podcast downloads.

We aim to help companies overcome the challenges of making a podcast. We want to help them create compelling content, build a podcast website, format their feed correctly, find listeners, and get a good return on their investment.

Jon and I have lots of plans for Transistor. This will be a side-project for both of us in 2018. He'll continue to work full-time, and I'll continue to sell my products, and do coaching to pay the bills.

One thing that excites me, especially for Tiny Wins customers, is that I'll be able to use Transistor as a live case study for my tutorials. Everything I'm learning and applying on my SaaS, I'll be sharing.