I've been on the platform since October 2008, and it's meant a lot to me. Twitter is where I go to connect with indie hackers, bootstrappers, and tech communities. It's where we debate ideas, share projects, and get feedback.

When Musk announced his bid to buy Twitter, most of my criticism centered on his past bad behavior.

After a failed attempt to get out of the deal, Elon took possession of Twitter on October 27. And I, like many others, wondered what his plans were for the platform.

Since then, lots has happened.

Many are wondering: is this going to kill Twitter?

To get some perspective, I decided to look at the history of what's happened so far.

One observation: back in March/April, Elon repeatedly said he didn't care about "making money" or the "economics" of Twitter at all.

He said his primary motivation for buying Twitter was to make it a "platform for free speech."

But, since taking over Twitter, most of his actions have been financial:

Back to the history timeline:

Musk's decision in April to forego due diligence before purchasing Twitter would come back to bite him.

At this point, Elon buying Twitter starts to appear incredibly financially risky (foolish?) for himself and Tesla. Wiping $126 billion off Tesla's valuation is enormous.

Many folks have forgotten that for 145 days, Elon was fighting hard to get out of the Twitter deal. Most legal observers said his "bots and spam" excuse was lame (if it was a genuine concern, he should have explored it in due diligence, pre-purchase).

What feels more likely is Elon realized that he, and Tesla, were losing a lot of money, and he got cold feet. It would have been cheaper for Elon to get out of the deal and pay the $1 billion penalty fee than to crater Tesla's market cap and spend billions of his wealth.

Once Elon realizes he can't get out of the deal, he shifts gears. He showed up at Twitter HQ on October 26 and has been camped out there ever since.

He immediately fires the CEO, CFO, top legal, and general counsel folks. (Which, in retrospect, was a little hasty? It feels like he could have benefitted from some council).

These moves show how desperate things are financially for a "private Twitter." Before Musk's takeover, Twitter "had about $6 billion in cash," which could have provided years of runway for the company.

lil reminder than twitter had 4+ years of runway cash in the bank when elon took over and none of this had to be rushed, if it needed to happen at all

But, Musk admitted that "Twitter was losing more than $4 million a day, largely because advertisers started fleeing once he took over."

By the time Elon took over, Twitter may have already lost most of its advertising revenue.

Elon's move to add more subscription income with Twitter Blue seems wise. But, there are questions on whether enough people would want verification. And estimates on how much additional revenue it would bring ranged from $15m/year to $115m/year to $300m/year.

These last few days have felt the most chaotic. Even folks that admire Elon as an entrepreneur were questioning his moves:

I think a good rule in business is to never bet against Elon...that said the first couple weeks at Twitter look like a complete disaster from the outside.

There are also lots of remaining questions on whether he'll be able to keep Twitter functioning.

Even Elon seems resigned that his Twitter takeover could fail. He told employees that bankruptcy wasn't out of the question, and later tweeted (and then deleted): "did it for the lulz." 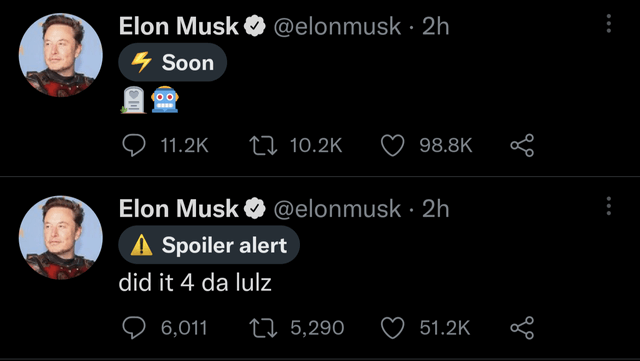 If Twitter is losing $4 million a day, that's $1.5 billion a year; plus, Musk is on the hook for another $1 billion/per year in interest payments. And those losses could get worse if more of Twitter's advertising revenue gets eroded (previously $5 billion/year).

According to Forbes, Elon's net worth has already fallen to $199 billion (that's down from $340 billion a year ago).

So far, he's sold roughly $19 billion in Tesla shares to fund the Twitter takeover; that's roughly 10% of his current net worth.

If Tesla shares continue to fall, and Twitter continues to burn money, even someone as wealthy as Musk won't be able to afford it.

Find me on Mastodon: @mijustin@mastodon.social