Björn started a side-business on the Shopify apps platform 6 years ago. Now he’s making $275,000 in profit per year! Here's my interview with him:

What’s the name of your business or product?

FORSBERG+two. Originally named like that for my wife and daughter (they’re the +two) but now we also have a little boy, so really it should be +three. My business has 4 products, all of them are apps for the Shopify e-commerce platform.

What’s the URL for your product?

Although the main channel for customers is through the Shopify App Store.

When did you start working on it?

Started as a side project in 2011, alongside my full-time work at an investment bank where I was a Business Analyst / Product Manager at the time. First app OrderlyPrint was launched in early 2012 and cost me $2000 to have developed in India.

The overall goal of me starting a business was to increase my freedom, and ensure I had more time to spend with my young family. Our first child was born only a few months before I decided to start, so my journey is not one focused on world domination.. but one of creating a business I love and that fits into my family life.

What did your journey to profitability look like? What were your biggest struggles?

OrderlyPrint started getting customers from day 1, but it was only 1-2 new users per day so by no means fast-growing. I would work evenings for 30 mins or so answering customer emails, thinking up new features and gaining reviews to climb the App Store rankings. In the beginning, I found it quite hard to limit the amount of time I spent on the business, and we had to set some rules at home to ensure I only did it once my daughter was in bed.

I did not know how to code myself, so I would save up a few months income and then have new features built for the saved money. That continued for over a year, and eventually, I wanted to actually keep some of it myself to stay motivated and justify the use of my time away from family. I had also just invested $15,000 in a new version (rewrite) of the same app, which turned out to be a bit of a flop.

So I started to learn how to code, digging into the app that I had designed and then working out small bug fixes or feature improvements. I scaled back on outsourcing as I got more experience.

After 2 years the app was making just over $4000/month, but then Shopify launched a competing app for free. Sales slowed, and it felt pretty dark. However, I then came up with a new idea which would leverage on a shortcoming in the free Shopify app. So I designed and built my 2nd app Order Printer Templates, which was an easy way to create customized/branded invoices, packing slips etc, for use in the free Shopify app. The app was a one-time payment style pricing model, so users would pay for a template once and then could use and update it as much as needed.

The toughest part up until this point was really staying motivated and seeing the long term possibilities. I had the luxury of doing it as a side business, so was able to wait it out and let time and compounding growth do its thing.. which I think is a big factor in me making it this far.

The new app took off more than the last, and I was starting to get close to my normal income at around $10,000 / month. In 2015 I resigned from my job to work on the apps full time. My wife thought I was crazy, and so did my workplace. Luckily my work kind of freaked out with me resigning and offered me a great deal to stay a couple more months, so I had a bit of extra unplanned cash in the bank which was great for my nerves.

Marketing has never been my strong side, and I still struggle with this now. I believe that I could be making a lot more from what I already have if only I knew how to market them better. I did release a free app to help with cross-promotion and traffic generation, but I’ve never really done any proper advertising or content marketing.

2015-2016 I moved into an office space, optimized my existing apps and also creating my 4th app, called OrderlyEmails. It’s a way for merchants to improve and customize all of the emails that your Shopify store sends to customers, such as Order Confirmation, Shipping notifications, etc.. much like a website theme but for emails. This was also a one-time purchase style app, so much more like a normal e-commerce store than a traditional Saas app. The great part about this app is that it has so many directions I could take it, and things that could be done to help it grow. For example, it could branch out into providing Marketing style email templates as well, I could do partnerships with website theme designers to have matching email designs, which I’ve actually just started on.

2017 my biggest issue has ensured that enough hours are left in the workday to improve and maintain the products after answering all of the customer enquiries and prioritizing those activities in the right order. It’s a good problem to have, as the more you sell the more enquiries you get and the more new ideas. Customer service takes about half my day now, and I’ve considered outsourcing it. The reason I have not done that yet is that it’s also my best channel for learning about improvements and ideas.

Currently, I’m at $27,000 / month revenue, growing on average 5% per month. My average day is from 9am-4pm so definitely within my goals. I do struggle with the idea of it all disappearing tomorrow, which I’m sure a lot of makers do.. it has proven to be a great motivator if you don’t let it overwhelm you too much. Otherwise, it would be way too easy to cut down on hours even more

How much profit does your business currently generate?

I’m currently at $275,000 USD in profit, per year. This includes my salary, as for a one man company it’s all one and the same. 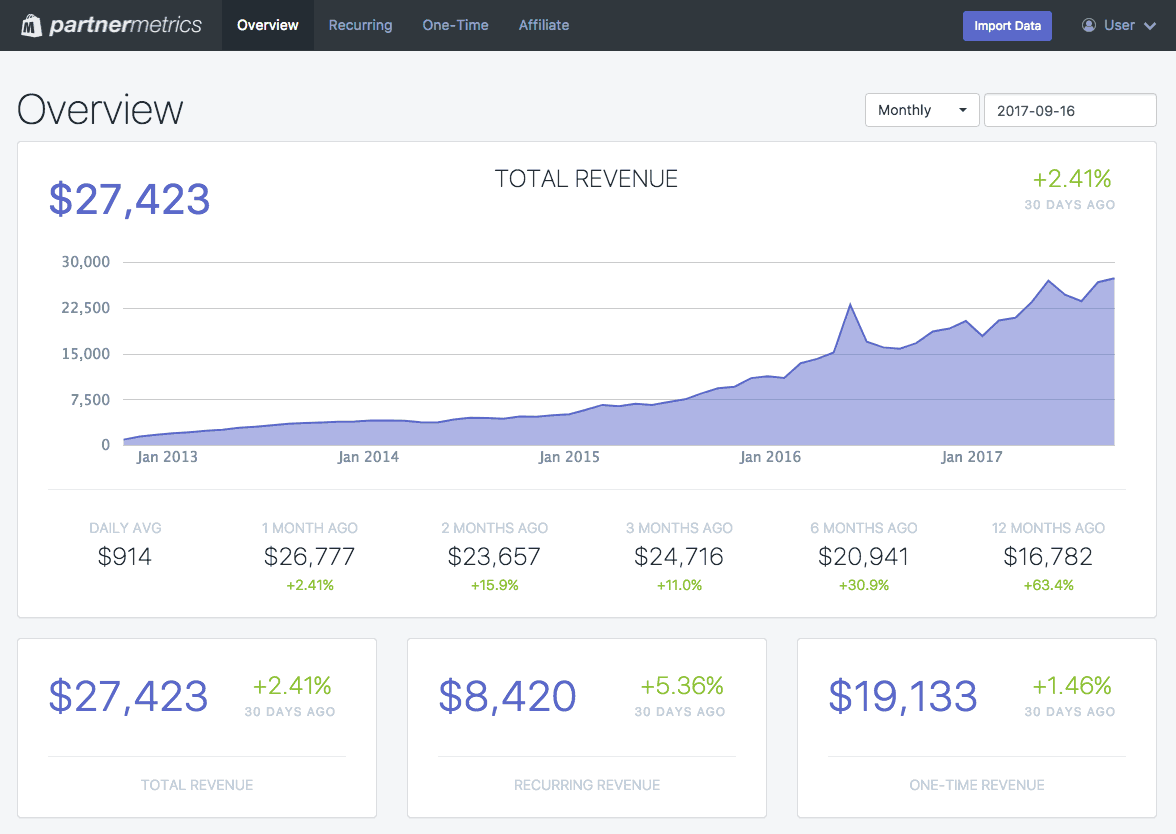 85% – Although that is after Shopify have taken their 20% partner share, which I have no influence on.

Why do you think your product has been so profitable?

Niche software that focuses on doing specific things really well. Sweating the details that other larger companies may not spend time on and really understanding where the customer is coming from and where they need to go. Using the right payment model that suits the customer has helped too, instead of just going for the default monthly subscription model.

Profit is Revenue – Expenses. How have you increased revenue?

Increasing and experimenting with pricing has by far been the easiest and best way to increase revenues for me. I think we often undervalue our own products, and it took me a long time to feel comfortable charging what users were actually willing to pay. Another way I’ve found to increase pricing is to actually increase expenses in the right areas. It’s much more efficient for me to pay for some software I need, instead of spending a week of my time trying to build my own custom solution. That way I have more time to focus on the things that actually increase revenue.

How have you reduced expenses?

I don’t think I have in a big way, but I’ve also never really grown them too much either. I’ve reduced expenses by using a more expensive hosting provider, such as Heroku which frees up my time and means I don’t need to pay ops engineers. Learning to do things myself, that are core to the business.

Are there any other tactics you’ve used to increase profits?

Making partnerships with other companies is proving to be a great growth opportunity for me. I’ve been lucky enough to create some good partnerships with an industry leader as the first, which has really helped open more doors due to recognition.

Business is hard (even for profitable companies)! What are you struggling with now?

Time and marketing! On the one hand I don’t want to hire because I really like not “managing” people, but on the other hand, I know I could grow and market more if I did. I’ve never been great at social and content marketing, so I’d like to improve on that.

How are you planning on improving your business this year?

What obstacles stand in your way?

Time, and knowing where to start. Shopify is also a unique challenge when it comes to affiliate tracking, so I cannot use an off-the-shelf system to track and payout.

Would you ever sell your business? Why or why not?

Yes, at the right price and more importantly the right time. I don’t want to part with an app that still has a long way to go in what I believe to be its full potential. For example, my email app is doing $10,000/ month now, and I feel with a few more features and extra designs it could be doing twice that.. and I’d love to see if I could get it there first. I was close to selling one of them recently when I was approached about it. It didn’t turn out this time, but definitely something that I’m always open to.

What do you think aspiring product people get wrong about building profitable products?

I think a lot of people expect them to be overnight successes and don’t realize that it most often takes years to grow and develop a product until it generates a liveable income, at least when bootstrapping. So they give up too soon. Of course if no users at all, then move on to a new idea, but if there are some traction and growth then be persistent and patient.