Not all products make good businesses

Product people are fixers. Our goal is to improve people's lives with software, so we're always hunting for opportunities.

So when we see a problem that's screaming to be solved, we can't resist.

We'll say: "This is something that needs to exist. People need it!"

But, finding a pain point, and fixing it, isn't enough.

Jason Cohen points this out in his latest essay:

Most of the time, real pain points addressed by great products are not a business. Which is why founders confidently begin and are surprised when it fails.

You might fix a problem people have, but that doesn't mean you can do it profitably.

Jason's point is reflected in this survey data from MakerMag: 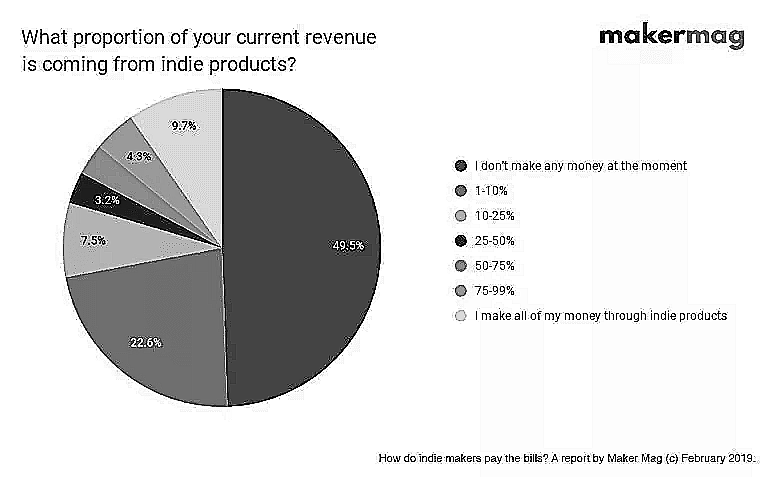 The hard reality is that most product ideas won't make sustainable, full-time businesses.

Most successful product people had to go through multiple attempts before they found their winning idea.

For example, Josh Pigford recently posted a list of the 50+ projects he's started over the last 15 years:

Of the 50 projects he started, only five are currently active. That's a 10% "success rate."

Likewise, Basecamp has started multiple products over the years:

Currently, they're only focusing on Basecamp 3. Everything else has been sold, spun off, or retired. That's an 8% "success rate."

According to Jason Cohen, for a product to become a business you'll need numerous potential customers:

And you have to do all of this, "at a profitable price, against existing market dynamics, and last for years."

Which is why it's imperative that you do the hard work up-front before you become 100% invested in an idea.

Most of your time, in the beginning, needs to be spent with potential customers. As Tomasz Tunguz notes, you want to find their "top three priorities."

No one has enough time in their jobs to attend to the fifth or sixth most important thing today.

Help customers make progress in areas that are really important to them. Those are the products that turn into good businesses.

One of my favorite ways to discover what's important to customers is to ask them:

Their answers will give you clues about their priorities.

For example, if they're buying software that helps them with their email newsletter, podcast, blog, social media, and ad management, you can bet they value marketing.

Don't get too discouraged if you don't succeed on your first try!

"People sometimes mistake hard problems (in the computer science sense) for valuable problems(in the business sense). Sometimes that venn diagram overlaps (like Google's search algorithms). But there's a number of cases where there's a really valuable problem, but it's not particularly hard on the technology side (AirBnB is an example of this)."

This post was originally published on April 2, 2014. It's been updated since then.