You can't change the customer's behavior

Many of the entrepreneurs and makers I meet want to change the way customers think. They make statements like:

"If I could just get people to care about the environment, they would buy my biodegradable widgets."

This is extremely difficult. It's like paddling upstream in a rushing river.

A customer doesn’t change their behavior after just one interaction. It changes over time.

They're influenced by culture, their peer group, societal expectations, and technological change.

For a paradigm shift to happen, customers need repeated exposure to new ideas.

In high school, I downloaded tons of music on Napster and Limewire. I couldn’t imagine doing anything else (“it’s free!”).

But a series of small events switched my thinking. Eventually, I became someone who bought my music instead of pirating it.

How did it happen?

First, there was Steve Jobs talking about piracy in his 2003 keynote address:

We believe that 80% of the people stealing stuff don’t want to be, there’s just no legal alternative. So we said, ‘Let’s create a legal alternative to this.’ Everybody wins. Music companies win. The artists win. Apple wins. And the user wins, because he gets a better service and doesn’t have to be a thief.

Another influence was me getting to know more artists, and hearing about their struggles to make a living.

Then I got a job. I wasn’t a poor college student anymore. I could afford music.

The final straw came with the birth of my daughter. This was real, adult life. It didn’t feel right to steal my music anymore, so I stopped.

Ironically, the behavior of buying MP3s is so cemented now that I haven’t yet switched to streaming services. I still purchase songs on iTunes like an old man.

The folks at Jobs to be Done have a great framework for understanding what drives us towards a new solution and what holds us back. 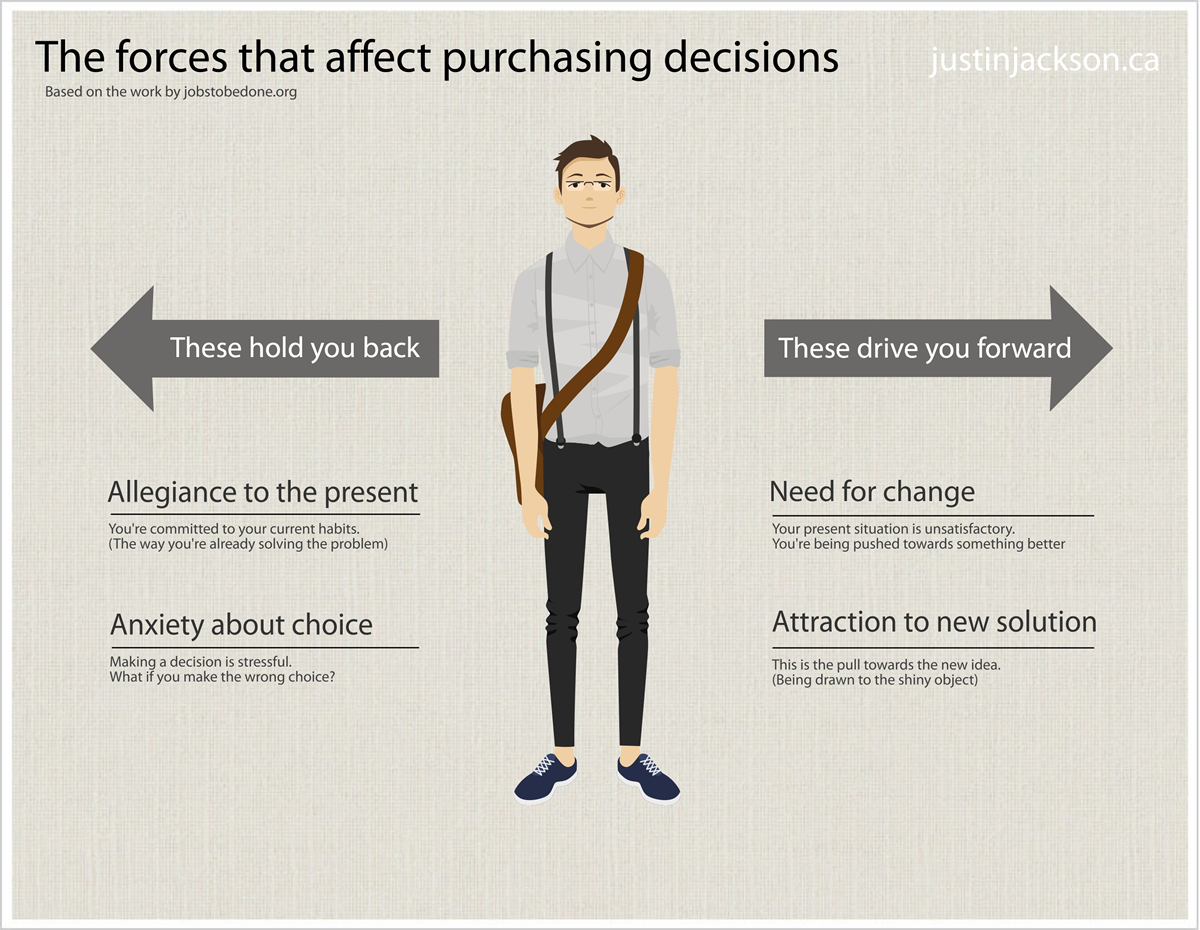 The allegiance to the present is much stronger than most product people realize. "It's good enough" is why people continue to use Microsoft Excel. There are many other options, but Excel "just works." Why switch?

Even if you can create something comparable, there’s still no real incentive to switch. Folks don't want to move laterally.

We're especially loyal to the product we're using now because we're lazy. Our brains get tired when we're constantly evaluating whether there's a "better solution" out there. Eventually, we choose and settle.

What make someone try a new product?

Google+'s problem was that it was too much like Facebook. People didn't want to move sideways and rebuild their network in a different place. Facebook was good enough.

Snapchat was different. It was so unconventional, weird, and fun that people couldn't resist it.

They had something truly new.

What if your product isn't a brand new idea?

Not working on the next Snapchat? That's fine. Most B2B products have more to do with the underlying need. For your product to succeed, find answers to these questions:

Don't build a product because it "seems like a good idea."

Make something people really want. Create a solution they're desperate to have and pay for.

PS: I talk about this process a lot more in Marketing for Developers (or, if you're non-technical, this one)