The myth of the niche market

There's an old internet myth that goes like this:

It's probably best exemplified in this old Merlin Mann quote from SXSW in 2009:

There is some wisdom in this: if you don't have a specific target in mind, it's difficult to build a unique position in the market.

But the idea that "the internet is big, and therefore, any niche will do" isn't true. There's more nuance to picking a market with strong demand than "the riches are in the niches."

In 2008, Kevin Kelly wrote a groundbreaking essay that made a bold promise:

To be a successful creator, you don’t need millions. You need only thousands of true fans.

Kelly's spearheaded the idea that the internet makes almost any niche viable:

"As far as I can tell, there is nothing — no product, no idea, no desire — without a fan base on the internet. Every thing made can interest at least one person in a million. Yet if even only one out of million people were interested, that’s potentially 7,000 people on the planet. That means that any 1-in-a-million appeal can find 1,000 true fans."

It's a theory that's full of optimism: "Every thing made can interest at least one person in a million — it’s a low bar."

But in practice, the math is more complicated. Kevin Kelly later concedes:

"The trick is to practically find those fans, or more accurately, to have them find you."

Every product will need to attract some critical mass in order to succeed. Finding that "one person in a million," pitching them, and then convincing them to buy is harder than it seems!

Even with the internet, we still need to be able to reach groups of reasonable size at a reasonable cost; otherwise, it will cost you too much time and money to find them.

Plus, to earn revenue from a fan, you'll need to produce something that they want, and they're willing to pay for.

When choosing a market, there has to be some minimum bar for:

In many markets, a pool of 7,000 potential customers won't be enough, especially if it costs a lot of time and money to acquire them.

How big of a market do you need to bootstrap a successful software business?

I've observed hundreds of independent entrepreneurs, at MicroConf, in MegaMaker, and my role as an advisor.

Almost everyone who is consistently earning more than $10k / month (and certainly those who break $50k) targeted a fast-growing product category, that was sufficiently large.

How large does it need to be? Here are some examples:

I think that asking "what's the smallest market I could serve?" is the wrong starting point.

Instead, look at the Total Addressable Market; the sum of the worldwide demand in a product category. Can you compete? Could you reasonably capture a percentage of that economic activity? 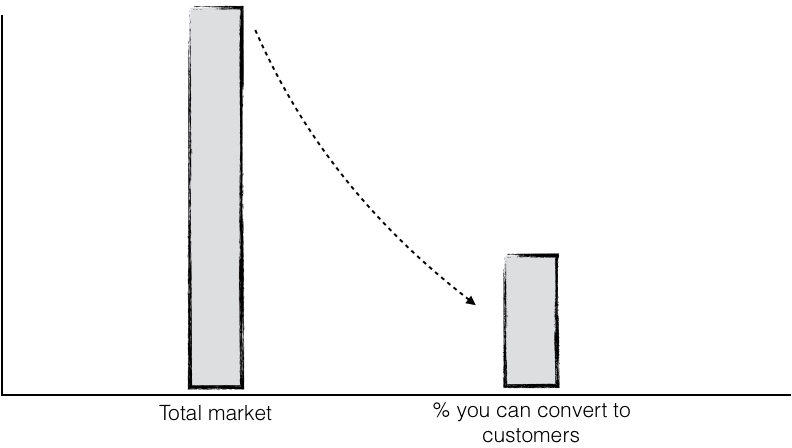 You can still target a niche within a larger market, but I wouldn't plan on capturing 100% of an already small market. As a bootstrapper, that's just not tenable.

Typically, we start our funnels with "number of visitors," but in reality, the funnel looks like this:

But smaller markets have significant challenges:

It's not until you launch that you'll realize how hard it is to grow your business.

Many companies in small markets charge significantly more than $100 / month, but that can make growth and acquisition even slower (and might require salespeople).

Focusing on a smaller overall market could mean everything takes longer. When feedback loops are slower, it might take you longer to learn that your market is unsustainable.

If you're thinking about launching a product for a small market, I highly recommend Techzing's interview with the founders of Moraware.

They make software for a niche group: countertop fabricators. 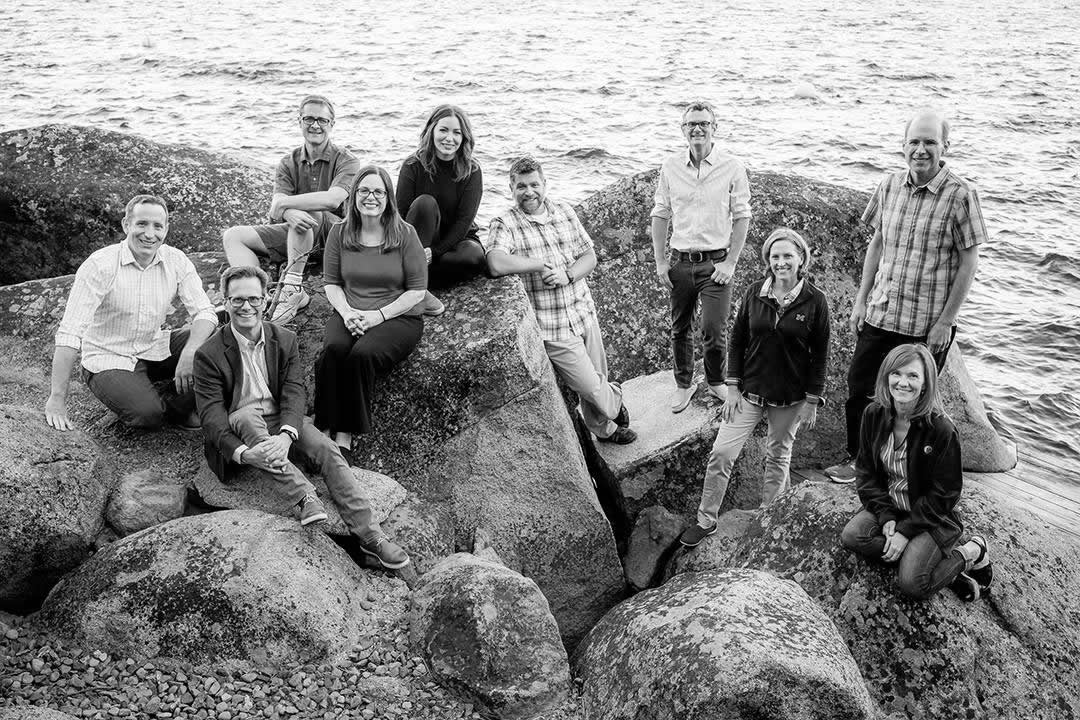 And they've been successful! Ted and Harry (the founders) have built up a nice business with Moraware. Launched in 2002, they grew to over 2,000 customers in 2019. They now employ eleven people (and they're hiring!).

But it wasn't easy getting there.

In the Techzing interview, Justin Vincent (the host) asks them about their journey. Here's an excerpt:

Justin: Did starting the company turn out the way you thought?

Harry: I thought it would be a few weeks and we'd be raking in the dough. And it turns out it was more like years... (laughs)

Justin: So, how many years were you guys both working on this before you'd made even any sensible money?

Ted: I'm not sure what you mean by "sensible." (laughs)

Justin: Like, enough to live off; enough to cover both of your living costs.

In a 2015 blog post, Ted notes that he and Harry both gave up six-figure salaries to start Moraware.

He goes on to say "this is what our profit chart would have looked like if Harry and I paid ourselves a market salary the whole time:"

Later in the interview, Justin asks them:

Justin: So if you could do it again, would you start the same company?

Ted: Probably not. (Laughs) Because it's just been a very long, slow grind. One of the reasons this market is available to us is because it's difficult.

You read about all these other startups we could be doing: something that targets a larger market. There, you can do the same amount of work, but get twice as many customers or ten times as many customers.

Again, what Ted and Harry achieved at Moraware is incredible: they've built a sustainable business that provides for eleven people and their families. It took them a long time to get here, but now they have a firm foundation that will serve them years into the future.

But if you're thinking of building a product for a small niche you should pay attention to their experience:

In 2018, I co-founded Transistor, a podcast hosting, and analytics platform.

Before that, one of my most successful products was a course called Marketing for Developers. It targeted indie programmers who wanted to learn marketing skills.

On its face, this seems like a pretty good market. Developers spend tons of money on courses every year. But how many are in my niche? And more importantly: how many want to buy a course from me? 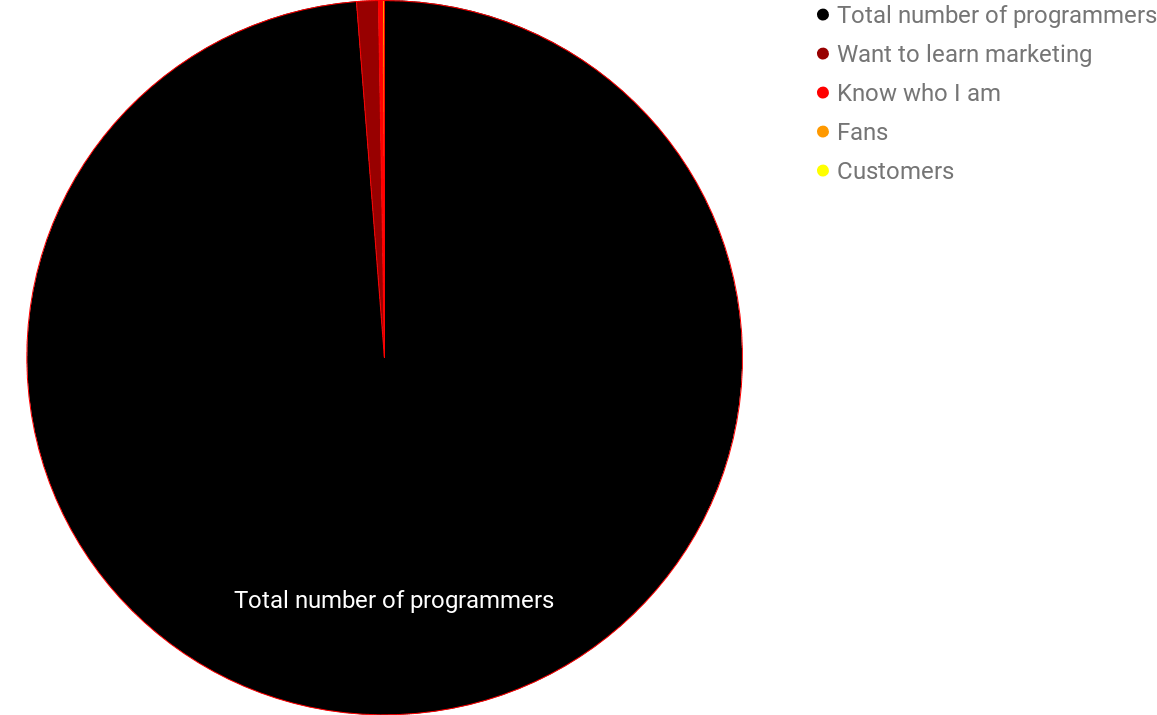 That big pool of 26.4 million gets whittled down pretty quick!

Between all my courses, I probably have about 7,000 customers (including customers from deal sites like AppSumo). Not bad! But if you're only selling one-time purchases, that's not sustainable.

As a contrast, my friend Wes Bos has probably made more than 7,000 sales in a single weekend selling to developers who want to learn JavaScript (a much larger niche).

In addition to selling courses, I've worked for a variety of SaaS companies since 2008. It's been interesting to contrast those experiences to what's it's been like to launch Transistor.

Right now, the podcast market isn't huge, but it is growing: the number of podcasts in Apple's directory increased by 100,000 last year, to 700,000 total. And there's still, potentially, a lot of growth left. (YouTube, for example, as an estimated 36 million channels).

This past week, Transistor hit another revenue milestone: $15,000 in MRR.

Although Jon (my co-founder) and I can't pay ourselves full salaries yet, hitting that number, ten months after launch, feels significant.

We've been growing 20-30% per month. I don't know when that's going to end (every day I worry: "this is all going to disappear tomorrow"). But right now, the momentum in the podcasting market feels different than what I've experienced before.

"You need all three, but if you don’t have the market right, everything is harder."

I believe that the market you target defines your company's capacity for success. Your timing and the product you launch will determine how much of that capacity you fulfil.

Successful fishermen fish where fish are.

And when he expands on this further, his advice for anglers sounds like good advice for entrepreneurs too:

It is the ability to accurately forecast where fish are likely to be, that separates the successful fisher from the fishless.

We had a motto in my tackle shop: "We don't sell fishing tackle, we sell dreams. The dream of more or bigger fish."

For many customers catching more or bigger fish was too lofty an aim. They merely wanted to catch some fish.

Many of these 'fishless' customers had all the right gear, so this was not their problem.

Too often unsuccessful fishermen use this nice piece of fractured logic: All fish live in water, thus all water has fish in it. Therefore anywhere you fish in water, there is a chance of catching fish.

Their problem was not how to fish, but where to fish.

If your fishing rod is your product, and your lure is your marketing, the most important decision you make is still where you fish. Choose wisely!

Published on May 23rd, 2019
Home About Articles Newsletter MegaMaker
Powered by Statamic